Muttersdorf and its Historic Development

The exact time when Muttersdorf was established cannot be determined. It is assumed that the first settlers in the area were Markomanni clans who sought to avoid the advancing Czechs in the harsh forested terrain. There are traces of an old “Wasserschlosses” [water lock – perhaps a sluice gate in a dam] at the Meierhof indicate that there was an very ancient settlement there. The “Wasserschloss” remains are dated to the year 1000. It indicates that a system of dams and waterways was used to create a defensive moat with a secure placement for the locks that was named “Auf der Insel” [on the island] until the beginning of the 20th century. This designation, among other things, proves that the German language was always spoken in this area and that the original name of the place was “Insel.” The Czech word for “Insel” is “Wostrow” or “Ostrow” and that is what the advancing Czechs called the place that was latter known as Muttersdorf. Around 1180 Mutina von Bukowec, a count from the court of Prague, became the owner of our village. The name “Muttersdorf” most likely is derived from his name. Mutina expanded and strengthened the simple fortifications then in place. The native popoulation settled next to the now-secure island and around the location of the present Meierhof. Subsequently Mutina laid out a town on both sides of the old highway leading west to Bavaria and gave it his name — Mutina at first and later, Mutinsdorf. This was not a typical Czech village built in a circle [Runddorf], rather a german “Reihendorf” in the style typical of Franconia and the Frankish settlers who gathered there. Mutina moved some of the earlier settlers a half hour to the west and gave the new place created there the old name, “Wostrow,” which eventually became Wasserau.

The first mention of Muttersdorf is found in a gift-deed dated 1253 held by Zbraslaus de Mutin, a descendant of Mutina. The parish is mentioned for the first time in 1352. The lords of Muttersdorf and Hostau had close family ties. Both places were often the property of one and the same lord or were divided between brothers, nephews and uncles. Both places were built according to the same layout. Two rows of houses from west to east, with narrow entrance and exits at each end and a broad market-place in the center. The romanesque churches are located on elevated sites and surrounded by the cemeteries. In both places the Meierhof is next to the Schloss [manor house or castle]. Each Schloss were formerly surrounded by moats. A German deed found in Munich and dated 1333 mentions “Mutterstorff.” The Hussite wars brought the village great suffering, plunder and destruction. An old oral tradition says that only a widow and two children survived the horrors. Near the end of the 15th century the small town of Muttersdorf became the property of the family von Wiedersperg who held it until 1857. In 1577 the von Wiederspergs gave a coat of arms to “Markt Muttersdorf”[“Markt” indicates the town had a special permit to be a central marketplace for other towns and villages in the vicinity]. It is a divided shield with the top section showing a miner on a golden background and the lower section showing a leaping wolf against a silver ground.

In 1680, house number 35 was sold for the price of one English horse, a saddle and a pistol. In 1751 the Schloss [palace] was burned out by a carelessly- caused fire and was never rebuilt. A one-story building to house Meierhof personnel was built on its site and the von Wiederspergs withdrew to a mansion located on the market place. That house then became known as the Schloss.

There was unrest about Robot [compulsory labor] in Muttersdorf in 1776 and in 1800, 1801, and 1808 border disputes with the Oberpfalz had to be settled. During the war with France [Napoleonic Wars] from 1793-1815 Muttersdorf was not in the theater of war but the local Infantry Regiment, Number 35, took part in almost all of the larger campaigns and operations. The residents of Muttersdorf also had much to suffer from “Einquartierung” [housing] soldiers and requisitions of food and feed for the marching armies. Austrian and Russian armies (1800-1814) and French armies (1805-1809) marched through the area, bringing much uneasiness. A cross set up between the last brick houses and the church fountain commemorates an incident in which a Russian soldier was unjustly accused of robbing the military cash boxes and was subsequently sentenced to death by firing squad. Another soldier had stolen the money and hid it. The cross is dated 1827.

In 1850 all matters concerning political and legal rights were assigned to the circuit court in Hostau. The communities were no longer “subjects” of an overlord, rather separate and independent. From 1869 -1926 the Count Coudenhove-Kalergi was the owner of the “Gutes Muttersdorf” [the Meierhof and agricultural land that belonged to the noble manor in the past]. The Meierhof was expropriated by the Czechs in 1926 and after that was managed by J. Muzik until 1938. In 1938 the Meierhof was under control of an administrator and in 1945 the son of the then-deceased J. Muzik took it over. Between 1933-1945 there were a series of disastrous fires in Muttersdorf which could not be explained. In 1933 the “Miasnerhaüsl” number 98 burned down, in 1934 a hugh fire broke out and houses number 31 (Julius Schnobrich), number 86 (Mulz) and 87 (Georg Gröbner), parts of the Meierhof (formerly numbers 21 and 132) were burned to ashes and number 17, the “Herrenmühle” operated by family Schlögl, were burned to ashes. The barns of Julius Schnobrich (Nr. 31), Georg Hammerschmied (Nr. 32), Josef Sellner (Nr. 29), Karl Maier (Nr. 28) and Wenzel Honsowitz (Nr. 27) were also victims of the flames. Fourteen days after that hugh blaze another fire burned down the barn of the Hannakam family at number 95. In August, 1945, the house and barn of Josef Hartl burned to the ground.

The First World War called for the loss of 50 men, the Second World War led to 72 deaths. On May 2, 1945, Muttersdorf was occupied by American troops. The day before, three American artillery shells had struck the town. They fell on the Marter cottage and on the “Schafberg.” There was little damage.

The first Czech soldiers arrived in June and by August 5, 1945, the political administration of the area was in the hands of the Czechs. On October 15 all of the former German possessions were delivered to the Czechs. On November 2, 1945, martial law was once more declared in Muttersdorf because of suspicion that there were weapons hidden there. Sixteen young boys aged 13-16 were arrested and taken to a warehouse in Tause where they remained until July, 1946.

One of them, Helmut Penkert became ill in the warehouse and died. The expulsion to of the citizens of Muttersdorf to Germany began in May of 1946. 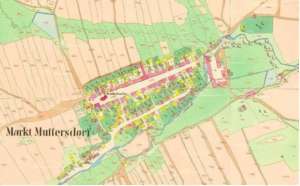 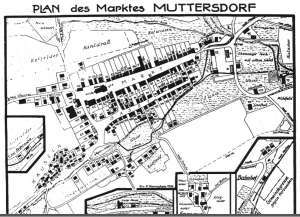 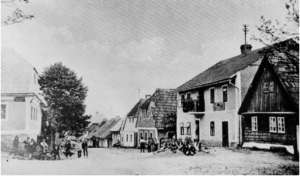 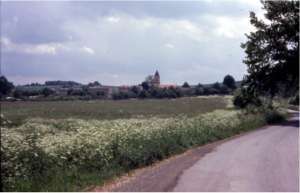 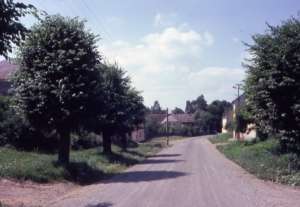 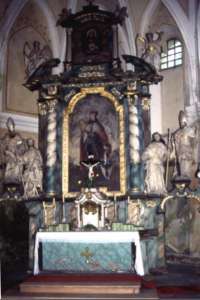 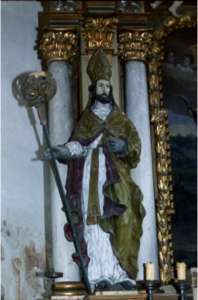